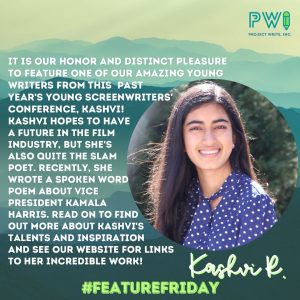 PWI: What inspired you to write this poem?

Kashvi: When I read about Kamala Harris, I felt great admiration for her; however, I saw her achievements as highly unattainable by kids like me. She was a Senator and had been the Attorney General of Ca – I couldn’t identify anything in common between us, my aspiration being performing! Although after I read the article where she discussed her late mother, I could feel a connection. Both our mothers were Indian, were strict and passionate, and always encouraged us to “think bigger” rather than settle for what we thought we could do.

I wanted to document these similarities, finding a way to put our comparisons on paper. Once I did so in the slam poetry format, I was very pleased with the result, and posted it to YouTube, partly because I wanted others to see Kamala the way I did, as a girl with big dreams that came true, and partly as a response in her defense for the massive backlash she was

facing at the time, which was right before the presidential election.

PWI: What is the writing process like for you?

Kashvi: The poetry-writing process for me is usually chaotic and disorderly, but I always require a flash of inspiration to start the process of putting the words down on paper. Passion- whether that be anger, happiness, sadness, or fear – always elicits my best work. When I write poetry, I disregard the perfectionist side of myself, the side that demands everything be “just right,” requiring writing and rewriting sections until I am satisfied. Instead, I write my first draft in “madman style,” as my English teacher calls it. While some people can sit down and write with a goal and prompt in mind, the tactic does not work for me. I see poetry as fervent and passionate, which can’t be forced. Once I finish the first draft, I will revise by taking out chunks of what doesn’t apply to the poem. Occasionally, I have scraped more than half of my work! Once I add more sections in, I will edit further for more relevant metaphors, fix grammar mistakes, and vary sentence structure to give my poem a specific feel. Lastly, I will finish by making final revisions, primarily to make sure the stanzas

flow from one to the next smoothly and the poem is more cohesive. For example, in the poem about Kamala Harris, I have a bird metaphor at the start, so I repeat it through the end with phrases, such as “keeps her from nose diving” and “I soar”.

PWI: What would you say to VP Harris if you had the chance?

Kashvi: If I were to meet Vice President Harris, which I hope happens one day, I would be speechless (which rarely occurs)! Then, once I collected my bearings, I would congratulate her on such an achievement, being the first female, black, and Indian vice president in American History: “You dreamed big, Mrs. Harris, and you accomplished your goals. Now I have proof that shooting for the moon and reaching it is possible.” I would talk to her about the similarities between us, and what she means to the Indian community. In addition, I would share with her my thoughts on the problems facing Indians today, the principle issue for me being our representation in the media, in hopes that she can promote it with her platform. Lastly, I would show her my poem, as it summarizes all I want to say.

PWI: What was the best part about your involvement with Project Write and the Young Screenwriters’ Conference?

Kashvi: While I loved all aspects of the Young Screenwriters’ Conference, from receiving the chance to write among like-minded individuals to hearing from experts in the field, my favorite part was watching My Entire High School Sinking into the Sea by Dash Shaw. I was used to watching animated movies that are like one another, but Mr. Shaw’s opened my eyes to the possibilities of creative filmmaking! I realized I did not have to adhere to a specific format in my own film work and could shape my script any way that makes sense to me. Similar to poetry, screenwriting has no boundaries, and, as I hope to go into the film industry someday, it was good to know my expectations of film were not unreasonable.

PWI: What would you say to someone who is struggling with writing? What advice would you give?

Kashvi: If I get the opportunity to speak to someone who is struggling with writing, the first thing I would say is “I understand; I constantly feel that way myself.” Writing is not easy, and everyone gets writer’s block from time to time. In terms of advice, I would tell them not to force it. We live our lives under pressure–writing, working, and even living for other people sometimes– when we should be focusing on ourselves. I would ask them, “What story so you want to tell? How do you want to tell it?” If they don’t quite know what they want to discuss, which is perfectly natural, I would ask them to use brainstorming techniques. “Write down all the ideas pertinent to the topic and leave it alone. After a few days, return to them with a fresh mind and a smile on your face, and see which calls to you.” If once again, they are ready to start the writing, I would tell them to take another break. I would recommend meditation or listening to music – whatever helps them to relax. Oftentimes, when I am in a writing mood, I will go outside and just look around, taking in the beautiful landscape. Inspiration can come from anywhere and even from totally unexpected quarters! The last bit of advice I would give them is this: “Writing is one of the most difficult forms of expression, and even a single, crazy idea can blossom into something great. Never discount anything and be proud of every little sentence you write”.

PWI: What are you working on currently?

Kashvi: Currently, I am in between writing projects. I have several song, story, script, and poetry ideas documented, but none entirely written; However, I am constantly writing and improving old pieces through attending slam poetry workshops offered by the experienced senior poets from Split this Rock for DC Youth Slam Team, of which I am a new member. Moreover, I am applying for numerous summer camps to help hone my poetry and screenwriting skills.

PWI: What’s on your TBR (to be read) list or what are you reading? Who are you inspired by currently?

Kashvi: I have too many books on my “To Be Read” list to count! Currently, I am reading White Tiger by Aravind Adiga. This book won the 40th Man Booker Prize, and I was drawn in when I read the synopsis. It is a story about Indian class struggles and a self-made man who escapes his small hometown and attempts to climb up the social ladder. I believe it will provide me more insight into my culture and the caste system in general.